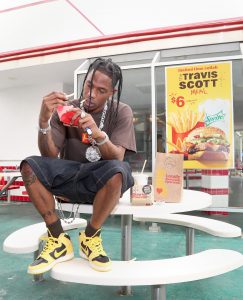 Travis Scott’s McDonald’s collaboration has continued to cause manic and mayhem on social media and Mickey D’s across the country. The “Highest In The Room” rapper teamed up with the fast food chain to drive young fans to the Golden Arches.

In exchange, they get a chance to divulge into the Travis Scott meal which includes a bacon Quarter pounder, fries and drink. According to People, the meal’s popularity has exceeded expectations, leading to shortages.

During last week’s collaboration debut, the Houston artist pulled up to the oldest McDonald’s location. The Downey, CA location is the third house of Golden Arches ever build. La Flame instantly drew a crowd of hundreds, filled with fans. After hopping out of his red Ferrari, Cactus Jack found himself atop an SUV performing “Highest In The Room.”

The Downey PD was not pleased with the crowd assembly. As a result, they attempted to control it to the best of their ability. As you can see, no one abided to social distancing guidelines and very few donned a mask for safety.

Ultimately, law enforcement issued both Scott and Mickey D’s with a citation of $100 each. Although it is not the steepest of bills for the superstar and the fast food chain, it did not make La Flame too happy about it either. He took to his instagram to voice his displeasure.