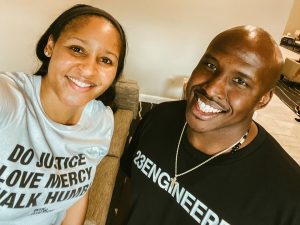 Moore and Irons revealed their love is rooted in the friendship that started after she helped Irons get free from prison after being wrongfully convicted 23 years ago.

“We wanted to announce today that we are super excited to continue the work that we are doing together, but doing it as a married couple,” Moore said. “We got married a couple months ago and we’re excited to just continue this new chapter of life together.”

Moore revealed the marriage occurred in a masked and socially distanced celebration with close friends and family. She also added the romantic feelings progressed over time and they first met through a prison ministry program when she was 18.

“Over the last 13 years we have just developed a friendship and just entered into this huge battle to get him home and just over time it was pretty clear what the Lord was doing in our hearts and now we’re sitting here today, starting a whole new chapter together,” she added.

Congrats to the newlyweds.

The post Maya Moore Announces Marriage to Jonathan Irons After Assisting Overturn His Wrongful Conviction appeared first on The Source.