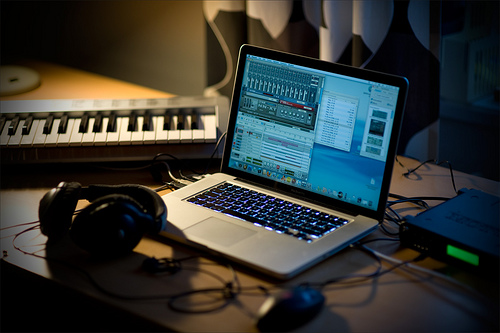 You can lift a groove from a recording by using hitpoint-based audio editing – most DAWs come with this ability as standard these days. Even if you’ve decided not to use a particular drum loop, you can capture the essence of its funk by applying the groove to your choice of sounds.

The pad-based Akai MPC samplers were all the rage in the early hip-hop days and are still popular today, as they let producers tap out their own grooves. You don’t need an MPC to play your own groove – you could use any MIDI controller, or perhaps beatbox and use hitpoint editing.

Chords might seem daunting at first, but they don’t have to be. Learn the fundamentals of chord construction. Once you understand how to build the simple major and minor chords (Google ‘music triads’), write a chord progression and experiment with adding another note to each chord.

Some tracks do the business just by looping a short piece of music that you can’t get enough of. At the heart of these loops usually lies an exceptional groove. Tweak your loops to make sure they flow nicely and feel satisfying at every stage.

“You don’t need an MPC to play your own groove – you could use any MIDI controller.”

Don’t rely on lyrics alone to provide your production with a hook = every backing track should also have its quirks and highlights. Think of the instrumental as a beast all of its own and put yourself in the shoes of the MC – they want something to vibe off and to inspire their verse.

Verses are one thing, but don’t forget that most hip-hop hits also have a chorus, and some have a middle 8 as well. Traditional-style song structure is popular because it works and is universally appreciated, so don’t shy away from the winning formula, even when in pursuit of something fresh.

Make space for the vocal

Make space for your vocal parts by keeping the verse arrangement sparse. You can also take an EQ to any competing sounds and attenuate the main frequencies of the vocal. If you continually find yourself turning the vocal up just to be able to hear it, then something is not right with your mix.

Use reverb on everything

You’ve probably been told not to use reverb on everything, but this is old-fashioned advice. Every sound in the mix should have a sense of space, even if you’re only gently mixing in the subtlest of early reflections. Just don’t go soaking every sound in hall reverb – that’s not the idea at all!

Without saturation, your mix will sound cold and clinical. Even the most modern, club-friendly records rely heavily on a bit of drive here and there. Try iZotope’s Nectar or its Alloy mixing plug-in – these let you tweak the saturated sound and mix it with the dry signal to preserve fidelity.

“Be aware of current mixing trends even if you’re producing an old skool-influenced cut.”

Support the lyrics with your arrangement and mixing decisions. Everybody has heard the obvious sound effects that correlate with the lyrical pictures being painted by the MC, but you might also think about how you might automate reverb sends when there’s a verse about running through a tunnel, say.

Be aware of current mixing trends even if you’re producing an old skool-influenced cut. Hi-hats seem to have fallen out of favour at the moment, for instance, being used very quietly and with as little dynamic range as possible. This sounds pleasant when played extremely loud in a club.

Use gates to minimise unwanted tails from the ends of sounds that don’t need them. Use a high-quality limiter or saturation to absorb sharp peak transients that eat up headroom and cut too far through the mix. Roll off high and low frequencies, or if that sounds bad, use shelving EQ instead.