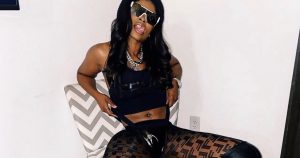 Upholding the title of “First Lady” can be a tall task. For Armani Caesar, she continues to prove otherwise. In her latest release, “Simply Done,” the Buffalo native comes through with a Griselda aligned track, shining alongside Benny The Butcher. The bar heavy record includes production from the legendary DJ Premier.

Caesar’s relationship with the Hip-Hop trio formed back in Buffalo, where she ran into Benny and Convway at a local studio.

“I went into the studio to inquire about some studio time because I saw a flyer,” said Armani. “I remember Benny was in there writing to this song and I was in the lobby part, so I ended up writing something to the song. Somebody ended up hearing me spit it. Then it spit it for the owner, then Benny.”

From there, she made frequent visits to the studio, leading to the recording of her first mixtape. With a knack for rap and great rapport with Benny and Conway, the studio became her 2nd home. Although true, the “Yum Yum” femcee remained indecisive about fully immersing herself in music. Her change of heart did not occur until Westside Gunn approached her with an offer she could not refuse.

“He called me and said yo I don’t see anybody being the first lady besides you. We got the 716 (Buffalo area code) story and you dead nice,” she recalled. “So what’s up?”

Following Gunn’s persuasive conversation, the rest was history. Armani Caesar follows Hip-Hop’s heritage of First Ladies including Lil Kim (Junior Mafia), Foxy Brown (The Firm), Eve (Ruff Ryders), and Nicki Minaj (Young Money). With acclaimed verses like ones on “Lil Cease,” and “Simply Done,” Armani is next to be mentioned with the woman who paved her way.