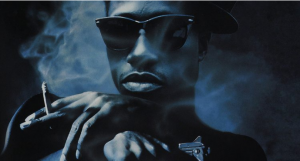 On this day in 1991, the soundtrack to the cult-classic crime thriller, New Jack City, was released. The story of the rise and fall of Nino Brown and the Cash Money Brothers has continued to inspire Hip-Hop culture for three decades and the music it yielded will forever hold a place in Hip-Hop history.

New Jack City came about at a pivotal time, in 1991. Hip Hop was still a fledging music genre and culture, looking to officially legitimize itself in the eyes of mainstream America. In addition, the blaxploitation film genre had been defunct for over a decade, leaving a gaping hole in “Black Hollywood”. New Jack City was a harbinger of the resurgence of Black actors, writers, and filmmakers in Hollywood, as well as the crystallization of Hip-Hop’s synergistic capabilities.

The soundtrack to the movie fit more like a time capsule than a collection of themed songs, with music that echoes the sentiments of “The Crack Era”, including Ice-T’s “New Jack Hustler”, the remake of the O’Jays’ “For The Love Of Money” featuring singing groups Troop and LeVert with a verse from a fresh female rapper from New Jersey named Queen Latifah.