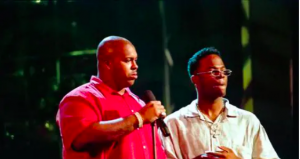 On this date in 1995, The Source Awards changed not only the perception of award ceremonies in music, but the acceptance speeches contained more braggadocios and challenging than some battle lyrics.

In the heat of the East Coast vs. West Coast beef Death Row head honcho Marion “Suge” Knight, draped in all red reppin’ his hometown Piru Blood set, took a blatant jab at Bad Boy Records founder Sean “Puffy” Combs aka Diddy after accepting the Best Movie Soundtrack of the Year award for the Above The Rim soundtrack.

With the awards taken place in NYC, the venue erupted with boos as Suge walked off the stage with Source’s coveted Mic and the momentum of the coastal beef only increased ten fold following this moment.

The post Today in Hip-Hop History: Suge Knight Disses Diddy at The Source Awards 25 Years Ago appeared first on The Source.