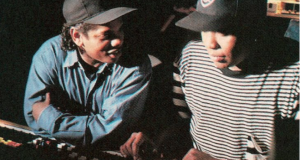 On this date in 1991, Eric “Eazy-E” Wright was allegedly shown his mother’s address by a few goons courtesy of Death Row Records, expediting the release of super-producer Andre “Dr. Dre” Young from Ruthless Records.

As it is well known, Ice Cube was the first one to leave the four-man fold of Niggaz Wit Attitude, but the departure of Dr. Dre was much more dramatic, with assistance from Death Row Records CEO Suge Knight. Legend has it that Dre called Eazy asking to meet him at the studio. When Eazy arrived, he didn’t see Dre, but he was met by Suge and a few Piru gang members.

After some reported and alleged roughing up, Wright let Young out of his contract with Ruthless Records, further securing the hood folklore of the power of Suge Knight. This was the genesis of Death Row Records, who would eventually sign Dre, Snoop and Tupac, making them the most sought after artists of their era. Welcome to Death Row.

The post Today In Hip Hop History: Eazy-E Forced To Release Dr. Dre From Ruthless Records 30 Years Ago appeared first on The Source.