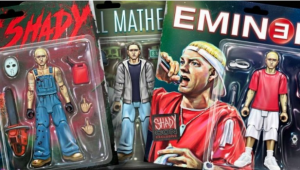 Eminem announced that he will be dropping his first NFT (Non-Fungible Token) release this Sunday, April 26 at 6:30/7 pm ET on NFT marketplace Nifty Gateway.  The drop, dubbed “Shady Con,” will feature a variety of Eminem-approved NFT collectibles.  In addition, the collection features original instrumental beats produced by Slim Shady himself specifically for this release. The tracks will be made available only as part of the limited-edition and one-of-a-kind NFTs. You can get a sneak peek at one of the offerings – a set of NFT action figures – here.  But this only scratches the surface of what’s coming this weekend!

Eminem first teased the announcement on Tuesday, retweeting the recent “Saturday Night Live” sketch featuring Pete Davidson in character as Eminem from the “Without Me” video, which parodied the song in an attempt to explain what an NFT is.

“I’ve been collecting since I was a kid, everything from comic books to baseball cards to toys, as well as every rap album on cassette I could get my hands on,” said Eminem.  “Not much has changed for me as an adult…I’ve attempted to re-create some of those collections from that time in my life, and I know I’m not alone.  I wanted to give this drop the same vibe of, ‘Oh, man I gotta get just that one or maybe even the whole set!’  It’s been a lot of fun coming up with ideas from my own collecting passion.”

“Shady Con” provides Stans, fans, NFT enthusiasts and collectors ONE OPPORTUNITY to own a piece from this premier drop. Born from the convergence of blockchain technology, creative enthusiasm, and pandemic doldrums, this drop was inspired by Eminem’s passion as a vintage toy, comic book and trading card collector that traces back to his childhood days as just “plain old Marshall.”  Make no mistake, this is a digital festival…but it’s modeled after the traditional “Con” gatherings where fans come together and trade their wares. You may not be able to get together with thousands of Stans in a poorly ventilated convention center somewhere on the outskirts of 8 Mile Rd., but this weekend you can rub elbows with each other on Nifty Gateway and own a piece of the collectible, non-fungible action!

The post Eminem To Drop First NFT Collection At Shady Con This Weekend appeared first on The Source.