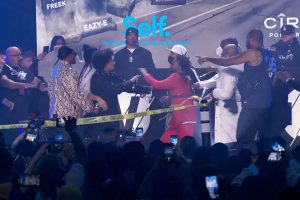 Three 6 Mafia icon DJ Paul joined Joy Crookes of FOX SOUL’s The Mix and had details regarding the scuffle on stage at the VERZUZ battle with the Mafia and Bone Thugs-N-Harmony. DJ Paul spoke to the tension of the night but also knew that a fight was possible.

“The beef with us and Bone was just a big misunderstanding for 26 years. I respect Bone,” DJ Paul said. “I kinda knew it was coming. He [Bizzy Bone] kind of told us on social media when he was talking about how it was going to be.”

When discussing the battle DJ Paul was asked if he would change anything about it, his response was, “It was perfect. I love the way everything happened.”

You can see the moment here.

The post Three 6 Mafia’s DJ Paul Says He Knew Fight at VERZUZ Battle was Coming appeared first on The Source.