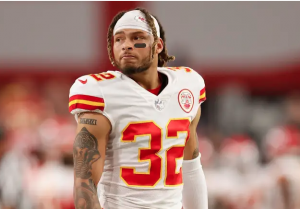 Many people are well invested in the NFL Playoffs, which are currently underway and last week’s Buffalo Bills vs. the Kansas City Chiefs made Jay-Z’s protegé Memphis Bleek express his personal, invested feelings about the Chiefs performance. That public opinion prompted a Chiefs player to weigh in on Bleek’s “performance”.

Bleek got on Twitter to talk about how bad he felt the Chiefs’ defense was playing, despite their win over the Bills, which will advance the Chiefs to the AFC Championship against the Cincinnati Bengals on Sunday(January 30).

When the game was over, Chiefs’ Tyrann Mathieu responded to Bleek’s opinion and gave his own opinion about Bleek’s work in the booth.