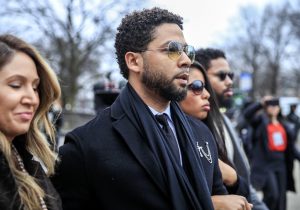 Yesterday, Jussie Smollet wrapped his testimony in his false hate crime trial. While on the stand, he was not afraid to check a prosecutor who continued to drop the “n-word” as he read Smollett’s text messages.

According to The Jasmine Brand, prosecutor Dan Webb read the texts in court out loud and Jussie would interrupt. “Can you spell or say the N word out of respect for everything African American in this room? you’ve been saying that word a lot.”

Webb responded, “I don’t intended to do that” before offering Jussie to allow him to read his own messages.

In January 2019, Smollett claimed he was jumped by two homophobic white men who assaulted him and put a noose around his neck outside of a downtown Chicago Subway restaurant.

During Smollett’s testimony, the actor spoke about his upbringing as a child actor to how he became Jamal Lyon on Empire. Following that, Smollett detailed the pressures of being an openly gay African American male character and collecting a $100,000 per episode salary.

Smollet stated he met Bola Osundario through a security contact. He said Bola offered to be his bodyguard. The two would do drugs and hang out, one day leading to a gay bathhouse to book private rooms. Smollett would also state he and Bola would drive around and smoke weed together, using those moments to count to a presumed “dry run” as presented by prosecutors.

Smollett will return to the stand Tuesday (Dec. 7) for more cross-examination and questioning.

The post Jussie Smollet Checked Prosecutor During Court for His Use of the N-Word appeared first on The Source.