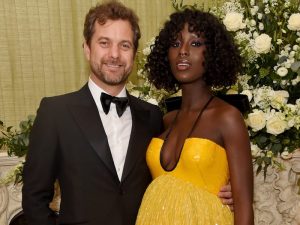 Joshua Jackson appeared on The Tonight Show and Jimmy Fallon asked him about the moment he knew he wanted to marry his wife, Jodie Turner-Smith.

“I knew the moment she asked me,” he responded. “She asked me, yeah, on New Year’s Eve. We were in Nicaragua. It was very beautiful, incredibly romantic. We were walking down the beach, and she asked me to marry her.”

Jackson continued, “There was like a preamble. There was a lead-up to it. I did not know [about it beforehand], but she was quite adamant, and she was right. This is the best choice I ever made.”

Joshua and Jodie tied the knot in 2019, months after igniting romance rumors.

They welcomed their first child together, Janie, in April 2020.

The Queen and Slim star isn’t afraid to defend her union with Joshua. When news broke that she was with a white man she responded, “hey siri, what is a “bed wench” and why are there bm in my dm’s calling me that?” She added a GIF of a black woman with an afro that read “U MAD?”

The post Joshua Jackson Reveals ‘Queen and Slim’ Star Jodie Turner-Smith Actually Proposed to Him appeared first on The Source.