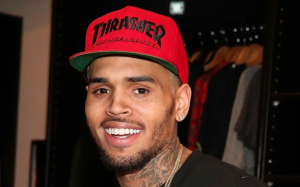 Chris Brown’s bodyguard is innocent, who does that?

According to TMZ, police were called to Chris Brown’s San Fernando Valley home last week for an alleged battery involving his security team.

Allegedly an unknown man was riding on a motorbike too close to the “Go Crazy” singer’s property. Breezy’s security stepped in to assess the situation and find out if the gentleman was a guest or someone from the neighborhood.

When Chris Brown’s hired bodyguard approached the man with a flashlight, stopping him to see why he was on CB’s property, he responded non verbally.

Seemingly he did not appreciate being stopped and reportedly spit in the security’s face. The police were called to protect the singer from any unwarranted allegations of wrongdoings or lawsuits.

LAPD made a battery report against the unknown assailant, but so far no arrests have been made.

This follows the news of the Los Angeles Police Department arriving to break up CB’s extravagant birthday party in May. Another incident in June they also responded to a battery call at his home after a woman claimed Chris knocked her weave off.

Is there ever a reason to spit on someone? They say that is the highest form of disrespect. Share your thoughts below.

The post ICYMI: Chris Brown’s Bodyguard Gets Spit On appeared first on The Source.