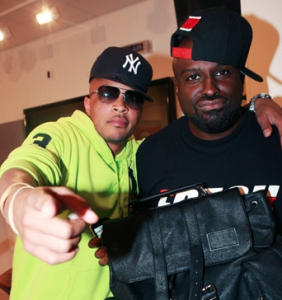 After a couple of weeks of teasing the Verzuz battle idea with 50 Cent and curving the idea with Busta Rhymes, NYC veteran DJ Funkmaster Flex used the majority of last night’s Hot 97 prime time radio slot to let New York and the surrounding areas know what he thinks about the self-proclaimed “King Of The South”. T.I.

Hot 97’s number one DJ set off his tirade with a new track from Busta’s new E.L.E. 2: The Wrath of God album before lowering the volume so that he could give T.I. a 10-minute piece of his mind.

“New York City, this is the most important Verzuz battle ever,” began Flex about the Jeezy/T.I Verzuz battle. “Because I’m gonna see a commercial corndog get handed to himself by the streets and I can’t wait because it can’t come any quicker.”

He continued, “T.I., let me tell you something about yourself. You played yourself with that 50 Cent battle because 50 was never going to step in the ring with you. He’s getting too much bread and you knew that. Busta Rhymes scared you. You really didn’t want that smoke.”

Flex didn’t let up there, directing his attention to T.I.’s 2007 federal arrest for gun charges, where he called T.I. a “snitch,” even referring to him as “McGruff the Crime Dog” for the Atlanta Crime Stoppers commercial he made following his sentencing.

Flex then disputed T.I.’s “King of the South” claim, saying his catalog couldn’t even touch that of his upcoming competitor Young Jeezy. Flex then went as far as saying he has a $100 bet saying that Tip won’t even show up for the Jeezy Verzuz battle.

“Let me play the best song T.I. ever made,” which is how the Big Dog introduced the Crime Stoppers commercial on-air, even going as far as adding a few cuts and scratches to Tip’s voice giving out the Crime Stoppers’ tipster phone number.

The post Funkmaster Flex Goes in On T.I., Calls The Crime Stoppers Commercial ‘His Best Record’ appeared first on The Source.

Nicki Minaj Gets Raunchy With Kenneth Petty In Post-Baby Photos