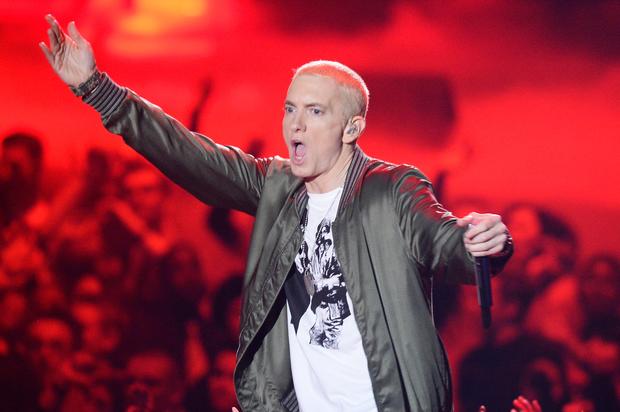 The feud between Machine Gun Kelly and Eminem is kind of old at this point but every so often, either one of them will take a jab at the other. It’s unsure what’s to be accomplished from that but either way, it’s safe to say that tensions have yet to die. Last week, MGK released his new project, Hotel Diablo which included a few references to his feud with Em. At one point, MGK raps, “I just spent too many minutes watchin’ little videos of wannabe rappers dissing me/ I just spent the winter livin’ after someone tried to send a kill shot, missin’ me.” Apparently, there’s a rapper, and Eminem fan, who took that line as a jab at him and decided to issue his own response to MGK.

DAv1d dropped off a new song in response to Machine Gun Kelly. The track is titled, “Hotel Dia-Blow” and opens up with snippets from both Eminem’s “Killshot” and MGK’s “Rap Devil.” DAv1d really thought he was on one with this one but it seems like his issues with MGK have been bubbling for a minute.

“Eminem has been very important to me, he helped me through a lot of hard shit, shit I don’t know if I’ll ever discuss,” DAv1d told HipHopDX. I’m always gonna be grateful to him. When MGK released ‘Rap Devil,’ it really burned me, more than I honestly thought it would and that’s why I wrote ‘Sniper,'” he continued. “I knew Marshall [Mathers] would be able to handle his own beef, but I needed to express myself.”

However, when it came down to MGK’s latest record, DAv1d took it upon himself to address the “feud.”

“With this second track, honestly it’s not so much about the anger anymore, I felt personally attacked, but that’s never been the type of shit that bothered me. This is just battle. Send a subliminal? I’m not just gonna let shit slide. I can murder anybody on a beat,” he continued. “Kelly got me going. Pussy better follow up on his shit tho.”