Eminem: Crooked I Is The Most Underrated Rapper Of All Time 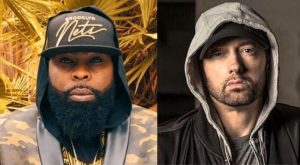 Has he ever heard of Kool G Rap?

During an exclusive live chat on Reddit’s “Ask Me Anything”, Eminem answered a myriad of questions, but the most interesting was his pick for most underrated lyricist, which Mr. Mathers chose to keep “in-house”.

Slaughterhouse’s own Crooked I was Em’s choice for most underrated rapper of all time. Arguably, many people will debate his point, however, there’s no doubt that Crook’s lyrical ability isn’t fully recognized. Of all time/ maybe not that much.

The post Eminem: Crooked I Is The Most Underrated Rapper Of All Time appeared first on The Source.