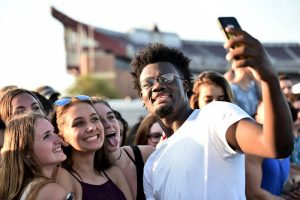 Royce Rodriguez, better known by his stage name, Ugly God has been arrested following a physical altercation that broke out, outside of a hospital.

According to DJ Akademiks, amid the physical altercation, the police were called on the scene and the “Water” rapper refused to comply with the police’s orders resulting in him getting arrested.

A video of the arrest has surfaced the internet, but there is no footage of what led to the altercation, or the altercation itself. The Indiana rapper is currently keeping his silence on the situation. We’re wondering if he will explain, or let this situation sweep under the rug, as the rapper has most likely been released from jail by this time or will be released soon.

At this time we can only do what DJ Akademiks suggest, as we wait to hear more details on the situation, which is to “pray for Ugly God.”

The post Ugly God Arrested Following Altercation Outside a Hospital appeared first on The Source.