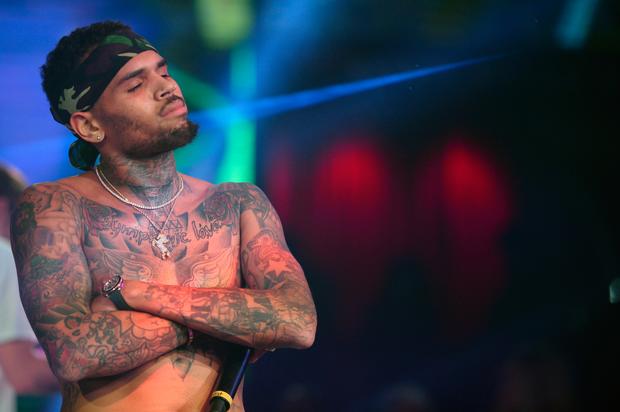 Chris Brown’s recent “Wobble Up” single, which features contributions from both G-Eazy and Nicki Minaj, has become somewhat of a runaway hit, having already garnered over eight million YouTube views. Unfortunately, not everybody is feeling the track, especially those who feel slighted by the clip’s artistic direction. Highsnobriety recently highlighted that visual artists – including Marius Sperlich, Tony Futura, Vanessa McKeown, and Catherine Losing – felt that “Wobble Up” ripped off their work without even bothering to provide due credit. Not only that, but the article pinpoints the work of Jamie Calderon, including his “censored fruit” series, which also went uncredited.

Marius Sperlich also spoke with Highsnobriety, explaining that the current artistic landscape leaves artists vulnerable to predatory practices. “At first I was made aware of the strong similarities of my works with the corresponding scenes from the music video by my community,” he explains. “The funny thing is that I am so used to this, that I wasn’t even surprised. My work is used on album covers, iPhone-cases, clothes, digital designs and so on-without permission. It’s not easy to claim your rights these days.”

Catherine Losing also spoke about “Wobble Up’s” visuals, which she blasts for having lifted from several of her peers. “What got me is the number of artists that they copied,” Losing says. “I’ve been shooting conceptual still life photography for 10 years and have a really good knowledge of my peer’s work. I counted five photographers whose work had clearly been copied.” Tony Futura also took a few shots at Brown and co-director Arrad, stating “I‘m not even that angry. It‘s just sad. Sad for all artists and creatives out there that strive to create original ideas and try to enrich our world with their work. It’s sad that Marius, me and the other artists were not involved in any way and it’s sad that our work gets dragged through some lame ass music video that wouldn’t be worth anything without our genuine work.”

Be sure to check out the full piece over at Highsnobriety; respect to them for giving the artists a voice, and helping raise awareness to stories of this nature. We can only hope those who feel slighted can find some compensation for their work, though by all accounts, it may be too little too late.