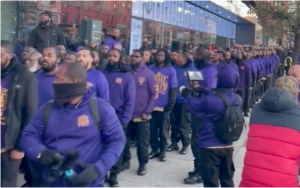 After walking through the fire and jumping through hoops to return to the NBA for reposting a perceived anti-Semitic video, Brooklyn Nets star Kyrie Irving was confronted by the media following his first game after being reinstated on Sunday.

The media wasted no time questioning Irving about the protest by the Hebrew Isrealite movement who marched in support of the troubled basketball player. Irving kept his answers very general, saying, “I would like to be on a platform where I could openly share how I feel without being harshly criticized or being labeled or dealing with outside perceptions that have nothing to do with me.”

The post [WATCH] The Media Asks Kyrie Irving About The Hebrew Israelites Protest Outside Of Barclays Center appeared first on The Source.