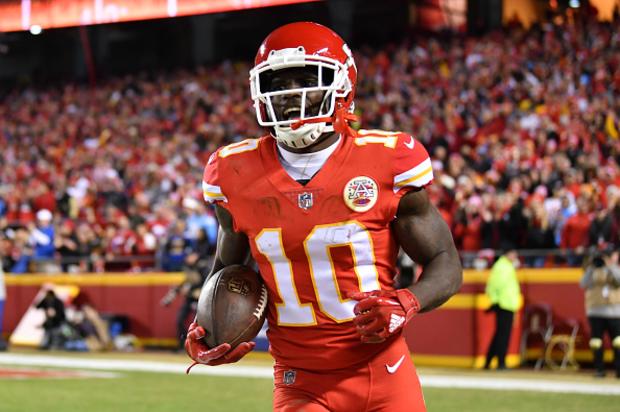 Kansas City Chiefs wide receiver Tyreek Hill is involved in a police investigation in Overland Park, Kansas, stemming from two separate child abuse incidents at his home, according to a report by the Kansas City Star.

Late last week it was reported that police, as well as the Kansas Department of Children and Families, were looking into an alleged battery that a source said left Hill’s three-year-old son with a broken arm.

The first incident allegedly occurred on March 5. Overland Park police were called to Hill’s home due to a report of child abuse or neglect at home, and Hill’s name was listed on the report. However, the case was closed three days later when no one pressed charges against Hill.

According to the Kansas City Star, the second incident resulted in Hill’s three-year old son breaking his arm. Crystal Espinal, Hill’s fiancee was reportedly named as “others involved” on the police report, though Hill himself was not.

Per the KC Star:

Back in 2015, Hill plead guilty to domestic assault and battery by strangulation, after he reportedly punched and choked Espinal who was then eight weeks pregnant with their son. Hill was kicked off the Oklahoma State football team as a result, but was still selected by the Chiefs in the fifth round of the 2016 NFL Draft.