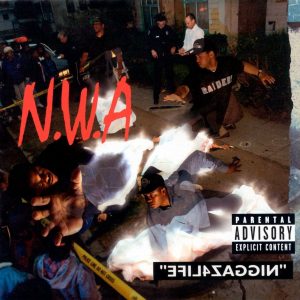 On this date in 1991, “the world’s most dangerous group dropped their second and final album as a group, ironically titled Efil4zaggin on the Ruthless/Priority imprint.

On the heels of Ice Cube departing from N.W.A. on a sour note to embark on a solo career, the now four-man group was slowly disbanding, but managed to churn out one last full length album. Dr. Dre and D.O.C. left the group to help form Death Row Records shortly after this project was released. The album offered up three singles; the memorable “Always Into Somethin”, “Appetite For Destruction”, which featured an Ice Cube sub and “The Days Of Wayback”. Because of the group’s success, the LP did eventually reach platinum status.

Salute to Dre, Yella, Ren and Eazy for giving us a piece of Hip Hop history!