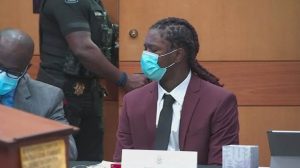 Even though the jury has not yet been selected, there has been no shortage of drama in the trial of Young Thug, whose real name is Jeffery Lamar Williams, and his YSL associates.

Last week one of Williams’ associates, Kahlieff Adams, was caught on camera walking up to Williams, where he sat in court, and handing him a package of Percocet in what prosecutors describe in their motion as a “hand-to-hand drug transaction.” Prosecutors further claim that Williams closed his hand around the package and moved it beneath the table to conceal it.

Deputies from the Fulton County Sheriff’s Office observed these actions, took the Percocet from Williams and confronted Adams.   The prosecutors say that Adam was searched and found to be carrying Percocet, marijuana, tobacco, and other contraband “wrapped in plastic and food seasonings to mask the odor of the marijuana.”

Adams was later taken to Grady Memorial Hospital.  Prosecutors claim that he had swallowed some of his contraband to hide it.  The defendants’ lawyers have argued this was because courtroom deputies used a taser on him.

The prosecutors then filed a motion seeking that the record reflects that Williams’ and Adams’ conduct caused a delay in the trial – in other words, asking the judge to make a finding of fact that these events had occurred and that Williams and Adams were responsible.   One of the defendant’s attorneys filed a response, which said that after Adams had been taken back to the holding cells, those in the courtroom could hear “loud banging and yelling” coming from that area. Two officers had removed their belts and firearms and rushed back to the holding area.   The defendants’ attorneys claim that Adams had to go to the hospital because he had been tased several times. They have urged the judge to deny the prosecution’s motion containing its version of the events and appoint an independent law enforcement agency to investigate.

Adams is currently serving a life sentence without parole for a 2019 murder and is being charged with attempted murder in the current case.

Williams was not charged for this incident, after his lawyers argued that he didn’t know what Adams was giving him and that he had immediately handed it over to the authorities.  However, Adams faces additional charges for possession of a Schedule II controlled substance, willful obstruction of law enforcement, possession of marijuana, and possession of an alcoholic beverage by an inmate.

This is the third instance of contraband smuggling into the courtroom during this trial.  Last week, the mother of defendant Deamonte Kendrick, known as Yak Gotti, was arrested for trying to smuggle in rolling papers and tobacco for her son.   Additionally, Judge Ural Granville has reportedly said in court that someone else had tried to smuggle in marijuana for one of the defendants, hidden in a pair of shoes.

Although jury selection has been ongoing for nearly three weeks, no jurors have been seated.  This trial will likely keep making sensational headlines for months to come.

The post The YSL Case: Perc Passing Points to Rocky Start for Young Thug appeared first on The Source.