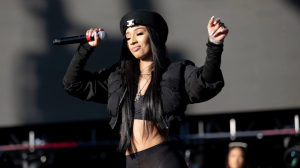 Rubi Rose is currently catching heat for comments she made during a recent Twitch stream with streamer Adin Ross about letting non-Black people say the N-word.

Rose was featured on Ross’s stream in July and mistook Ross for a light-skinned Black man. When Ross told Rose that he was white, he then asked her if that meant he could use the N-word. Rose then went on to say that he could use the N-word and believes other non-Black people can use the word if they don’t use it with any malicious intent.

She continued, “So, as long as the person isn’t saying it with malicious intent, personally, ’cause I have like Mexican homegirls and white homegirls who be saying it, I don’t care about other people. We’re friends and they are cool with it.”

After the month-old clip recently surfaced social media proceeded to drag the Kentucky rapper for her comments.