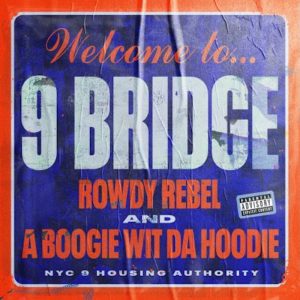 The reigning generation of New York rap superstars is continuing to go off. This time Rowdy Rebel and A Boogie Wit Da Hoodie have linked for their new single “9 Bridge.”

The feature from Rowdy continues an impressive run of appearances, following his appearance on “Solid” from the Slime Language 2 compilation album that came from the Young Stoner Life Records roster.

Back in March, A Boogie celebrated his Hoodie SZN album going double platinum, which featured the Michael Jackson sampled, “Look Back At It.” The track went on to receive a certification of 4x platinum.

You can hear the new release below.

The post Rowdy Rebel and A Boogie Wit Da Hoodie Connect for “9 Bridge” appeared first on The Source.