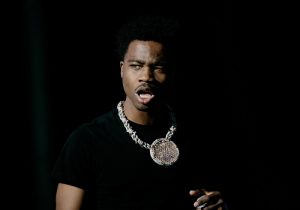 Roddy Ricch might have a calm demeanor, but if there’s one thing not to do, don’t accuse him of “false flagging.”

In a recent Clubhouse chat, Ricch hopped on a chat with music exec and manager Wack 100, to address claims made by Yah-L, a Crip from Compton who is accusing Roddy of not being a Crip.

“It’s a lot of chatter and I just wanna get it from…like… what’s really going on, bro? It was a lot said,” Yah began.

Before he could even get another word in, Ricch interjected. “We not gon’ do that. I got phone calls, text messages, I’m seeing on the internet that I’m false flagging. I wanna know what’s going on.”

Yah-L then went on to claim that Roddy was not from the hood and never from the hood, despite Roddy repping the city of Compton.

“I’m asking you a question… You ain’t see me get put on to Blacc Macc?… Alright, champ, three n*ggas, put two of them down, that ain’t official? I know a lot of little homies that ain’t get their official, n*gga.”

Yah eventually became even more upset, telling Roddy that “real ones” didn’t help him earn the money he made. Roddy fired back, saying “You playing internet games on some sh*t—I don’t even know how to use this Clubhouse sh*t. I had to call Wack four, five times, he callin’ me. You thirty, forty years old using this app, n*gga, I’m twenty-three. I don’t even know how to use this sh*t. ‘Cause I’m over here trying to make the Forbes again this year, man.”

Roddy then went on to tell Yah about the people from Compton that he has helped due to his success. He then claimed that he shot all of his music videos in Compton until his debut album Please Excuse Me For Being Antisocial, and that he was in Compton so much that his label had to call him to tell him to stop.

“I done made $20 million in a year, you think I’m ’bout to be posted up with you, n*gga?!” You can listen to the argument below.

The post Roddy Ricch Goes Off In Clubhouse Chat After He’s Accused Of Faking His Crip Status appeared first on The Source.