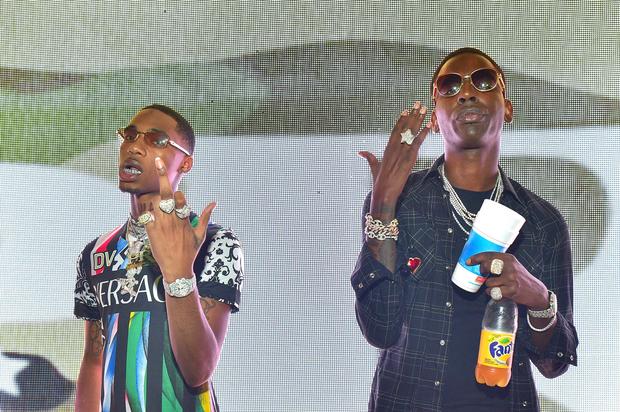 Memphis rappers, Young Dolph, his Paper Route Empire artist Key Glock, and Project Pat just released their fire collaborative  single “CheezNDope” yesterday, and it seems as though there’s some unusual, and highly destructive sort of marketing scheme going on to promote the track. It’s not yet been confirmed as to whether it is indeed a publicity stunt, a friendly joke, or just straight up beef between the two, but Glock has taken to causing some pretty expensive damage to his label head’s vehicles, and is posting in on Instagram for all to see.

On Friday, July 12th, Glock began posting a stream of videos on his Instagram page which showed him smashing out the windshields on Young Dolph’s flashy rides with a baseball bat, and having a ball while doing it. “@youngdolph look what you made me do..😂😂😂🤦🏾‍♂️🤷🏽‍♂️” he titled the first clip, where he can be seen in Dolph’s driveway alongside several of the rapper’s signature camo-painted vehicles. Before proceeding to calmly take out a bat and go ham on the windshield, Glock takes a minute to jam out to the song that’s playing loudly from the speakers of the Rolls Royce he destroys, setting off an alarm. In the second clip, the car’s alarm screeches away onlookers stand around in disbelief. “I ain’t know you was fittin’ to do that, bruh,” one man says. But Glock takes it even further, later coming across a jeep parked in the garage area. “He tried to hide this muthafucka,” Glock says as he laugh, before busting out the windows of that vehicle as well.

Young Dolph obviously saw the videos, and in an Instagram story which actually confuses the situation even further, he replied to Glock’s antics with a threatening “@KeyGlock So you wanna play huh? 😈”

Singer Duffy Explains Music Break: “I Was Raped And Drugged”