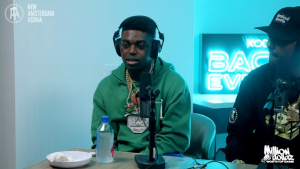 His entire career, Kodak Black has been telling people that he’s one of the greatest in this generation. He felt strongly about his statement that he went to the extreme to even call Jay-Z out in a versus battle. That verses battle probably didn’t happen and probably won’t happen. What did happen is that Kendrick Lamar put Kodak on his album, and he didn’t disappoint.

Out of all the artists featured on K.Dot’s fifth studio album, Mr. Morale & The Big Steppers, Kodak stood out the most. Here is some of the fire Yak displayed on “Silent Hill.”

Every Thursday, girl’s day, spendin’ time with my daughter, make me go harder. Every Sunday’s son’s day, teach my boy to be a man, I ain’t had no father. Fell in the love with the block, I ain’t have no pop, just a sawed-off shotgun, Mossberg. We stackin’ that money up proper, awkward diamonds, look like marbles. Audemars water, aqua, beatin’ the block up ’til we spout ’em. I don’t want your ice, boy, I want your life, but fuck it, I still might rob ’em

On Twitter, fans praised the Broward County native on Mr. Morale & The Big Steppers. Here are some of the responses.