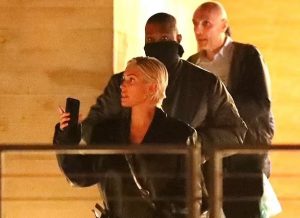 Kanye West is heading to Australia to meet his new wife’s family. Before he leaves the country, Ye introduced a member of his family, his daughter North West.

According to Hollywood Life, Ye and his new wife Bianca Censori were at Nobu Malibu when North and a friend were dropped off for dinner.

According to The Herald Sun, Ye “is believed to be heading to Melbourne to meet her family.”

During the visit, Ye and Censori will spend time in Ivanhoe, where Censori grew up. The two wed in a private ceremony in Utah but did not file any official marriage documents.

Previously, his new wife, Bianca Censori’s family, is elated by the pair’s union.

Speaking with the The Herald Sun, Censori’s sister, Angelina Censori, said “It’s very exciting news for both my sister and the family, but we choose to have some privacy for the time being.”

Another relative, Alyssia Censori, co-signed the joy, stating, “super happy for them both.”

The love for Kanye and Bianca is not universal. Following the news of the new marriage, Kanye’s ex-wife, Kim Kardashian, reportedly “hates” Bianca.