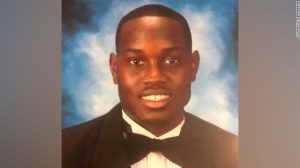 Jurors in the trial of three white men charged with killing of Ahmaud Arbery delivered a guilty verdict on most charges.

Travis McMichael, Gregory McMichael and William “Roddie” Bryan, Jr. were each charged with nine counts each in Arbery’s death.

Travis McMichael was on trial of fatally shooting him with a shotgun.

The jury found Travis McMichael guilty of all 3 counts including a charge of malice murder. His father, Gregory McMichael and his accomplice William “Roddie” Bryan were both found guilty of felony murder of Arbery.

The decision comes after a month of court proceedings, including a lengthy jury selection process that began October 18th. A leaked video that went viral, prompted the defendants arrest. It shows the three men chasing the 25-year-old Black male as he jogged along a neighborhood in Brunswick, Georgia.

Attorneys for the three men claimed they acted in self-defense after attempting to place Arbery under citizen’s arrest. They cite a Civil War-era state law which effectively gave anyone permission to capture enslaved Black people.

The law is outdated and has since been removed.

All three defendants in the Ahmaud Arbery murder trial in Georgia could face life in prison or the death penalty after being found guilty on Wednesday.

Reports say both of those charges are punishable by death or life sentence.

The post Jurors In Ahmaud Arbery Murder Trial Find Defendants Guilty On Most Charges appeared first on The Source.