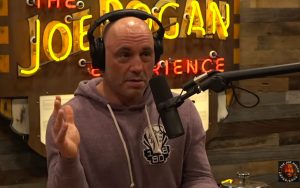 Joe Rogan is not the one to shy away from controversy as has made headlines in the past for some of his controversial jokes and even saying the “N-word” multiple times throughout the years. Now, Rogan again made headlines for accusing Dwayne “The Rock” Johnson of using steroids to keep up his physique at 50 years old.

The accusations came on a recent episode of his podcast while he was discussing fitness influencer Brian Johnson, also known as the Liver King, who was recently exposed for using $11k a month in steroids despite promoting a “ancestral” diet of liver and raw meats.

“There’s no way you can look like that, in your 40s,” Rogan said. “The Rock should come clean right now.”

Rogan further criticized The Rock saying that there is no way the wrestler-turned-actor can be even bigger than he was when he was in his 30s. “He should make a video in response to the Liver King video. I need to talk to you because the Rock’s been lying. There’s not a fucking chance in hell he’s clean. Not a chance in hell. As big as the Rock is, at 50? He’s so massive, and he’s so different than he was when he was 30.”

Rogan added that like the Liver King, The Rock too has a responsibility to people that are listening to him, and he should be honest about it. Rogan went on to add that he does not think there is anything wrong with taking a hormone replacement.