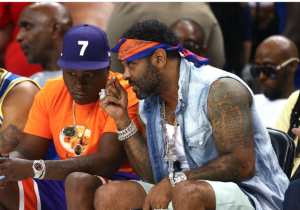 After the historic 2021 VREZUZ battle between tow of NYC’s hardest crews, Dipset and The L.O.X. where the boys from Y.O. annihilated the Harlem World crew, Dipset capo Jim Jones says he wants all the battle smoke with L.O.X.’s Jadakiss.

Madison Square Garden was the location of the lyrical homicide by VERZUZ MVP Jadakiss and when asked if a rematch of the MSG defeat was something he had in mind, Jones replied, “We got on stage with n-ggas we respect and have known for 20 years, It was a dope event overall and it’s something I don’t think the city will ever get to witness unless we happen to do a rematch or something like that. Jada got the best of the situation, and I owe him one. Don’t worry, I got him.”

Jim is currently promoting his collaborative mixtape with DJ Drama/Gangsta Grillz titled We Set Trends, which dropped today(January 14), but admits that he still wants that solo rematch of Yonkers vs. Harlem with Kiss.

“I would want to have a Verzuz with Jada. Solo,” he said with a smile. “He has to deal with me on my terms. He better be prepared. When it comes to a top three, I don’t really have a list. I just got real smoke with Jada.”

He added, “I don’t like how he did that [laughs]. I want total smoke with him. Anybody else is welcome, and if the setting is New York, I feel like I can hang with whoever. I got some New York shit, the city. I got that.”

The post Jim Jones Demands VERZUZ Battle With Jadakiss Following The L.O.X. vs. Dipset appeared first on The Source.