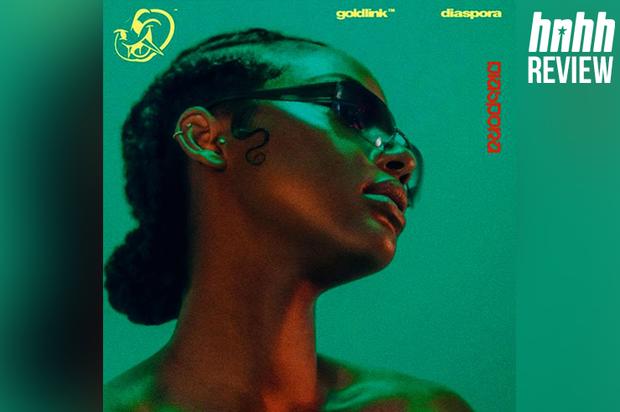 Earlier this year Tory Lanez released an EP entitled International Fargo, on which he remixed songs by artists from other countries (primarily Jamaica and Nigeria). It was an intriguing concept, but one that required more heavy lifting than Lanez seemed willing to provide, content to piggyback on “featured” artists’ existing work and/or rely on the North American market’s relative unfamiliarity with international sounds. Goldlink, who like Lanez grew up in a very cosmopolitan city, attempts something similar— albeit much more involved— on his latest album.

Diaspora is named after a Greek word that describes the scattering of an ethnicity, community, or peoples across the globe. The largest modern diaspora is, without question, that of African peoples in the wake of the trans-Atlantic slave trade. Goldlink sets out to explore this rich cultural intermingling that’s occurred in the wake of multi-generational tragedy, playing around with song titles (“Zulu Screams,” “Spanish Song”), global slang (“ting,” “dutty wine”), and especially an eclectic cast of collaborators. We get artists from all corners of the States (L.A.’s Tyler The Creator, Texas’ Khalid, Virginia’s Pusha T) as well as London (Ari Pen-Smith, Jay Prince, WSTRN), Nigeria (Maleek Berry, WizKid), and even Hong Kong (Jackson Wang). Perhaps the best indication of Diaspora‘s melting pot vibe, as well as the best illustration of a diaspora’s ability to blur lines, is that Goldlink’s most frequent vocal collaborator, Bibi Bourelly (credited on three songs), is of Moroccan and Haitian descent, has dual citizenship in Germany, and has spent most of her life in the DMV. Chalking up someone’s identity like that can seem arbitrary, but Diaspora‘s exploration of roots, hybrids, and border-blurring champions the idea that cultural background is an important-but-fluid aspect of life.

Amid this roomful of regional sounds (which also includes plenty of producers who don’t hail from the States), Goldlink does an admirable job of experimenting with global sounds while ceding ground to those who know more about said sounds than he does. Aside from minimal slang, he alters little about his approach to rapping, and often takes the backseat. This, as well as (obviously) the musical composition, is what separates him from artists like Lanez or Drake, who often try on trendy subgenres like clothes that they have no intention of purchasing. An album with this mission is inevitably going to have awkward inter-continental transitions, but at least Goldlink is open about that, if not actively interested in that, through his invocation of the word “diaspora.”

It’s interesting that Diaspora follows At What Cost, Goldlink’s 2017 album that was as committed to DMV insularity as Diaspora is to global inclusion. The DC area’s vibrant, unique sounds (like go-go) are clearly products of diaspora, but Goldlink’s last was very much a “zoom in” project, whereas this one’s decidedly in “zoom out” mode. At What Cost was leaps and bounds beyond what Goldlink had achieved before with his and producer Louie Lastic’s self-dubbed “future bounce” sound, a rich and heartfelt portrait/love letter to the places and sounds that the young rapper knows best, and it’d be a tall order for any album as purposefully eclectic as Diaspora to top that.

While there’s a light narrative thread that runs through the album— a loose, backward-facing journey from DC street shit to Goldlink investigating his ethnic background— you could be forgiven for missing it, as Diaspora plays much more like a lite World Music comp for a backyard BBQ than it does a hyper-personal odyssey through cultural trauma. Considering the format and length, that’s probably for the best, lest we end up with an ambitious overstep like Logic’s Everybody. It does, however, mean that Diaspora comes off a little more like a compilation or More Life-esque mixtape than it does a worthy follow-up to one of the best rap albums of the last three years.

None of Diaspora‘s songs are necessarily weak on their own, but there are ones that completely interrupt the album’s flow, and ones that do a little too much. Both Pusha and Tyler seem a bit out-of-place— not that there’s no room for high-profile guest here, as Khalid cements his Frank Ocean Lite reputation on the breezy “Days Like This”— but neither mega-star adds much in the way of depth or regional flair in their respective appearance, instead seeming pompously air-dropped into the middle of an otherwise low-key affair. And while most of the international sounds are deployed tastefully, the intro of “Zulu Screams” is very over-the-top, and the background noise/ad-libs on “Spanish Song” seem caricature-esque. These moments cast relief on the rest of the album’s ability to coast along and make region-hopping seem effortless.

In terms of Goldlink’s continued evolution, Diaspora is a promising step, a diversification of skills, a feather in his cap. While he probably has an At What Cost sequel in his abilities, it’s best that he isn’t hanging around his hometown and making the same album over and over like some kind of rap game Matt McConaughey in Dazed and Confused. Goldlink’s logical endpoint is making an absolute banger that features Shy Glizzy and WizKid (GlizzKid?) over a beat by, like, Flume, and Diaspora inches him closer to that bright future.

Stephen Jackson Fires Back at Trump over George Floyd Comments: ‘Do Not Speak On My Brother’s Name’

Billie Eilish Agrees With Tyler, The Creator: “Urban” Shouldn’t Be A Music Category