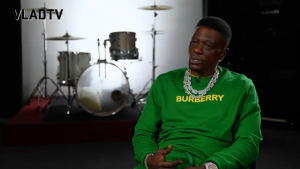 In July, the first official collaboration between Lil Nas X and NBA Youngboy happened in “Late To Da Party (F*CK BET).” The single also obviously served as a diss toward BET after Nas X didn’t receive any BET Award nominations.

Returning to Vlad TV to get everything off his chest for this month, Boosie Badazz states he was not a fan of Youngboy hopping on the track with Lil Nas.

“If ever see YoungBoy, I’ll tell him how I feel about that,” Boosie said. “I thought YoungBoy was like me. We represent a certain group of people and what we do affect those people. That’s why I always try to stay a hundred. I thought he was like me in a certain, a lot of ways. I don’t want to talk about it on camera how I feel about it, but if I ever see him, I’ll tell him how I feel.”

The relationship between Boosie and Youngboy has been a bit fragile lately, so it may not be best if he approaches the rapper about the single.

Boosie Badazz was one of many dissed by NBA Youngboy on his “I Hate YoungBoy” single. “Feel like Boosie don’t even like me, bitch, don’t call my phone, fuck you,” the young Louisiana star rapped. Once again sitting with DJ Vlad, Boosie revealed why he did not reach out to Youngboy and dissed him on a song instead.

In October 2021, Boosie had beef with Lil Nas X and went on a full-on attack of Lil Nas X in a homophobic rant and suggested Lil Nas commit suicide.

“STOP TROLLING ME F—– LOL!! U A WHOLE B—- PLAYING WITH A GANGSTA SMH U CAN KEEP SUCKING D— N GETTIN F—ED N YOUR A– N PEACE N #uhateyourself I WOULD TOO IF I WAS YOU LOL NASx IF YOU #commitsuicide YOU WOULD DO THIS WORLD A HUGE FAVOR NOBODY WANTS U HERE,” Badazz tweeted.

Among those who saw Boosie’s words online was Lil Nas X’s father, Robert Stafford, who had words of his own for the “Wipe Me Down” rapper.

“How the hell you’re a gangsta rapper promoting drugs, gun violence, degrading women and getting high every video talking about you’re for the kids man sit your old man looking ass down,” Stafford wrote on his Instagram story.