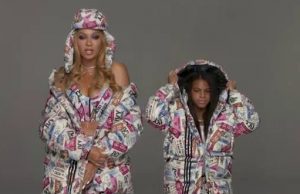 Trophies are all around the home of The Carters. On Sunday, Blue Ivy Carter won her first MTV Video Music Award. She is just nine years old.

E! News has noted that Blue Ivy is the youngest winner of the Moonman since the show’s inception in 1984. The victory was for Best Cinematography for Beyonce’s “Brown Skin Girl.” Blue Ivy’s vocals appear on the song as a collaborator, along with WizKid and SAINt JHN.