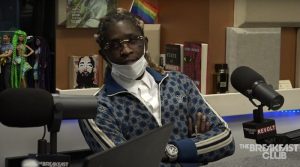 We’ve heard stories before about seeing the potential in others and motivating them to grind, but Young Thug and Lil Baby’s story takes the icing on the cake.

Before his start in the rap game, Lil Baby has been previously transparent about his lifestyle before the fame. The 26-year-old rapper stated that he was heavy in the streets after being released from jail, but barely dibbled and dabbled with his lyrical pen.

“So he was like, ‘Okay, how much money are you gonna make today?’ I was probably going to make like $7K, maybe $10K. He just went, ‘I’ll give you that – just go to the studio.’ Sh*t went like that,” the rapper shared.

While social media users didn’t believe the accuracy of Baby’s story. In an interview with The Breakfast Club, Thugger shares exactly why he decided to help Baby get out of the streets sharing that he didn’t want to see Baby go back to jail.

“I was just…I just didn’t want him to go back to prison,” the Slime City rapper stated. “I was scared for him to go back to jail ’cause he had just did a bid. He got straight outta jail and went straight back to the same neighborhood. The same house that the police bust and locked him up. He went right back to the same house. It was a spot. I think I was more scared for him, of like prison.

“Before rap, he was getting a lot of likes on his Instagram, and people like… He had nice ass captions. Like bro, you should try to make a song,” Thugg continued. “Just show him the life, took him a few times everywhere. You know? He started seeing, this sh*t kinda easy. We grew up together, too. It makes it seem like it’s easy if he seen me do it.”

Fast forward to today, Lil Baby, whose real name is Domonique Jones, stands as one of the most influential artists in the rap game. With six multi-platinum singles, three Grammy Awards, and four top-selling albums, Lil Baby is unstoppable. Check out the rest of the clip below.

The post Young Thug Explains Why He Paid Lil Baby to Stay Off the Streets appeared first on The Source.