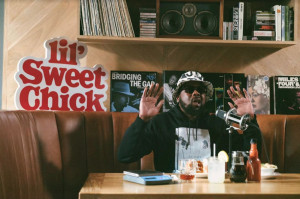 Conway and Griselda always ensure their rabid fan base is always happy and fed.  Conway has already put his mark in 2020 with collaborative projects with Alchemist (LULU). Big Ghost Ltd (No One Mourns The Wicked) and appeared on high profile projects from Westside Gunn (Pray For Paris), Freddie Gibbs & Alchemist (Alfredo), and Lil Wayne (Funeral).

Now, with From King To A GOD, Conway The Machine’s metamorphosis is complete, and with his ascension, he asserts that he will no longer be denied his rightful place as a “God Emcee.”

From King To A GOD is Conway’s most diverse project to date and it features guest appearances and production from Westside Gunn, Benny The Butcher, Freddie Gibbs, Method Man, DJ Premier, Havoc, Lloyd Banks, Dej Loaf, Alchemist, Daringer, Erick Sermon and Hit-Boy.  From King To A GOD debuted at #126 on the Billboard charts and #16 on the Emerging Artist Chart and at #134 on the Rolling Stone 200 Chart.