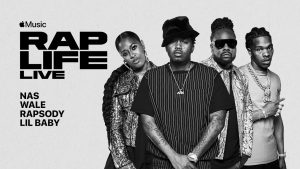 Apple Music teamed up with Howard University for its Rap Life event. It features performances with Wale, Lil’ Baby, Nas, and Rapsody.

The event recorded at Howard University and is hosted by Ebro, Nadeska, and LowKey. It isn’t only a concert but expands the conversation about impacting black communities and the youth. It also featured interviews with Howard students. They discuss race relations in this country and the progress made.

Peep the performances above.

Trump & Biden To Be Muted During Next Debate, President Calls Move “Biased”

DaniLeigh Will No Longer Clear Up Rumors About DaBaby Romance: “I Don’t Really Care”