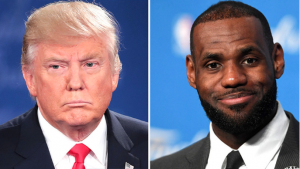 Basketball living legend Lebron James has used his platform as a celebrity to speak on issues that affect the Black community and at almost every turn he’s received his share of backlash for voicing what many could see is only his unanimous opinion. Nevertheless, nothing the Lakers star has said in the past rivals his most recent tweet regarding Columbus Police Officer Nicholas Reardon, who killed 15-year-old Ma’Khia Bryant in his home state of Ohio. Now, James’ most controversial tweet to date is catching flack from none other than former President Donald Trump.

“LeBron James should focus on basketball rather than presiding over the destruction of the NBA,” a Trump statement said. “His RACIST rants are divisive, nasty, insulting and demeaning. He may be a great basketball player, but he is doing nothing to bring our Country together!”

James’ tweet saying “you’re next” was criticized for possibly putting Reardon in harm’s way. Lebron soon after deleted the tweet, saying it was “being used to create more hate.”

“This isn’t about one officer. it’s about the entire system, and they always use our words to create more racism,” James said. “I am so desperate for more ACCOUNTABILITY.”