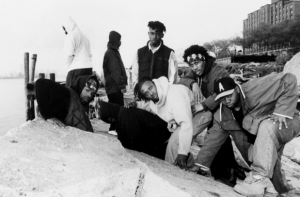 On this day in 1993, the legendary Wu-Tang Clan began their reign as one of the most powerful and influential rap groups in history by releasing their debut single “Protect Ya Neck.” With this track, Wu-Tang took the rap game by storm with a style unheard and an attitude unseen. “Protect Ya Neck” set a tone in Hip Hop that shifted the genre toward a more hardcore, rugged sound.

Originally recorded in a different order with a completely different beat, group member RZA took the liberty to reconstructed the song in post-production to the goliath that we all know and love. According to him, all he needed was the vocals of the group. The original beat used was just a place holder used to get the verses. This unique style of production became a trend for Wu-Tang Clan. RZA’s unique style also incorporated the kung-fu film dialogue as well as fight scenes throughout the track.

In an effort to clear up any confusion of who is who on the song, the order of verses is as followed: Inspectah Deck, Raekwon, Method Man, U-God, Ol’ Dirty Bastard, Ghostface Killah, RZA, & GZA. The single was first released independently through Wu-Tang Records and had “After the Laughter Comes Tears” as the B-side. It was later re-released by Loud Records with “Method Man” as the B-side. It sold 10,000 copies.

The post Today in Hip-Hop History: Wu-Tang Clan Released Their Debut Single “Protect Ya Neck” 28 Years Ago appeared first on The Source.