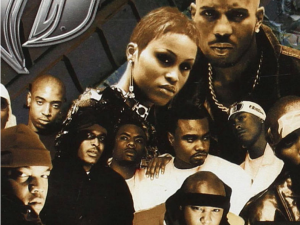 On this date in 1999, the label known as Ruff Ryders Entertainment dropped their first Full-length studio release aptly titled Ryde Or Die Vol.1, which the label released alongside the Interscope imprint.

With production from the likes of Ruff Ryders in-house producer Swizz Beatz as well as DJ Clue, tracks like First Lady Eve’s “What Ya Want”, the hypnotic “Jigga My Nigga” featuring Mr. S Dot himself, and the title track with the entire Ruff Ryders camp, which was an updated and upgraded version of the Hit Squad’s “Head Banger”, made this album a certified classic. The RIAA certification was the proof; the compilation LP was certified platinum by June of the same year. The Double R doubled up on the Ryde Or Die series in 2000, but it never saw near the success of its predecessor.

Salute to Dee Waah, Swizz, the entire Ruff Ryders camp, The L.O.X., Hov and everyone else who was a part of this important piece of Hip Hop history! Extra Special Salute to the Dog!!! DMX RIP