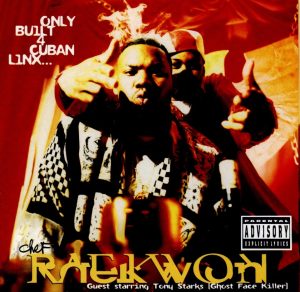 Exactly a quarter century ago, one of the greatest conceptual albums in the history of Hip Hop was released. Raekwon The Chef released his debut album, Only Built 4 Cuban Linx, guest starring his right hand man, Ghostface Killah aka Tony Starks.

Released on the Loud/RCA imprint and produced exclusively by The Abbott himself, Only Built For Cuban Linx was available on cassette, which was manufactured and distributed in a violet casing, thus, spawning its nickname. The album’s influence was tremendous on other landmark LPs of that era including Jay-Z’s Reasonable Doubt and Nas’ It Was Written, with heavy mafia references, the introduction of Cristal to the hood, and constant usage of the 5% Nation’s language of Supreme Mathematics and Supreme Alphabets in the lyrical content. The album also introduced the other WTC members via their aliases i.e. RZA is Bobby Steele, Ghost as “Tony Starks”, Deck is “Rollie Fingers”, Meth is, of course, “Johnny Blaze”, Masta Killa as “Noodles”, the Genius as “Maximillian” the Chef as “Lou Diamonds” and all together known as the “Wu-Gambinos”, which is the 16th track on the journey.

The Four and a Half Mic Classic’s(writer Nicholas Poluhoff) story line plays out as a film, using many samples of John Woo’s Killer as an interlude between several tracks. The album contained several classic singles that had lives of their own in others spaces. The platinum selling album yielded legendary hits such as the radio/female friendly “Ice Cream”, the inspirational “Glaciers Of Ice”, the genre sparking “Criminology”, which gave birth to many “Shark N****s”, which was an ode to biters and commanding them to “be original”. Ghost even shot a dart at the late B.I.G., accusing the slain legend of biting Nas’ pre-adolescent album cover concept. The album concludes with a positive build from the late Popa Wu aka Freedum Allah, which reminisces about the past life of a young, crimie Raekwon who evolved into the multi-faceted individual seen today, which ironically is called “North Star(Jewels)”.

This platinum selling time capsule is a must have for all real Hip Hop fans, aficionados, critics and historians. Salute to the entire Wu, especially Rae, Starks, and the RZA for this gem. We will forever be in debt to you guys for the “Purple Tape”.