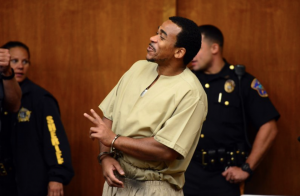 On this date in 2009, Charles Wingate, better known as Max B, was found guilty of manslaughter and robbery charges from a stick up gone wrong on September 22, 2006, in which David Taylor was shot and killed execution-style at a Holiday Inn in Fort Lee, New Jersey.

Max, along with his girlfriend Gina Conway and step-brother Kelvin Leerdam, devised a plan to tie up, gag, and rob Allan “Jay” Plowden, but ended up shooting Taylor point-blank in the head when he returned to room 408 from running an errand. Taylor didn’t possess any of the money. Plowden called the police to report the murder and was discovered by the police attempting to remove $30,000 in cash from the room. He was eventually charged with identity theft and money laundering.

Max was originally sentenced to 75 years behind bars in 2009 but had his sentence reduced in 2019 from 20 years to 12 years and is scheduled to be released sometime this year.

The post Today in Hip Hop History: Max B Found Guilty On Manslaughter, Robbery Charges 11 Years Ago appeared first on The Source.