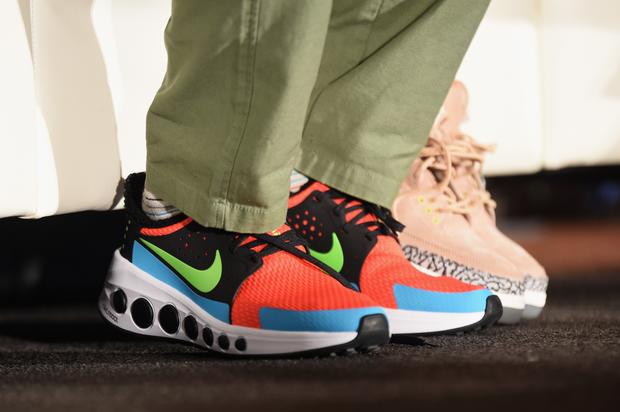 Nike’s brand new midsole technology, react, has been having a pretty solid run as of late. It’s comfort rivals that of Adidas Boost and has people talking about Nike again when it comes to the leader in running shoes. Of course, you can’t talk about Nike and design in the same sentence without mentioning legendary sneaker designer Tinker Hatfield. Hatfield was recently at SXSW where he did a talk on shoe design. During the event, he took off his Air Jordan 3’s and put on a pair of what is being dubbed the Nike React 2019.

The shoe is pretty wild looking, as multiple colors made up the upper. Red, blue, and green materials make their way throughout the shoe, while a white midsole with black circular plugs rounds out the features. There is another colorway of the shoe that has surfaced so far, although that model has a toggle lacing system and can be seen in the Instagram post below.

According to Hatfield, the shoe will be released in either the Summer or Fall which will be perfect for runners who are looking for a brand new comfy shoe to wear. Although, Hatfield was on record saying these sneakers are much more than a running shoe.

“Not for running, it’s for something else,” Hatfield said according to Sneaker News.