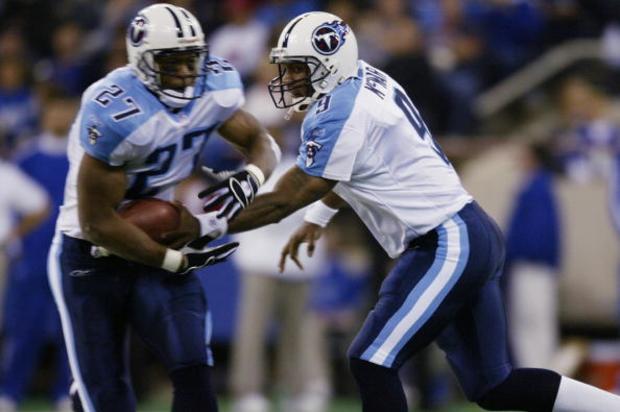 The Tennessee Titans have today announced that Steve McNair’s #9 and Eddie George’s #27 will officially be retired during the team’s September 15 home opener against the Indianapolis Colts.

“Steve and Eddie will be forever linked as two of the driving forces for our team in the late 90’s and early 2000’s,” says Titans controlling owner Amy Adams Strunk said.

“They were the heart and soul of the team and each made the other a better player and ultimately led to a great deal of team success. Their statistics will forever live in our record books, but their play and sacrifice is what our fans will always remember. For that and all that they have done for our team, the number 9 and 27 will be retired with the all-time franchise greats.”

According to the Titans, George’s #27 will be the first #27 jersey retired in NFL history.

McNair and George were teammates from 1996-2003, which resulted in four playoff appearances, two division titles, two AFC Championship Game berths and a trip to Super Bowl XXXIV. During that eight season span, the duo led the Oilers/Titans to a record of 80-48, which ranked third behind only the Denver Broncos (83-45) and Green Bay Packers (88-40).

Pop Smoke’s Streams Spike Up to 392% Following his Death

Eminem on Being a Guest in Hip Hop: ‘I Never Said I Wasn’t’

Wendy Williams Steps Out For Date Night With Rumoured BF