Tekashi 6ix9ine Wins The Rights To His Name From Former Best Friend, & Manager 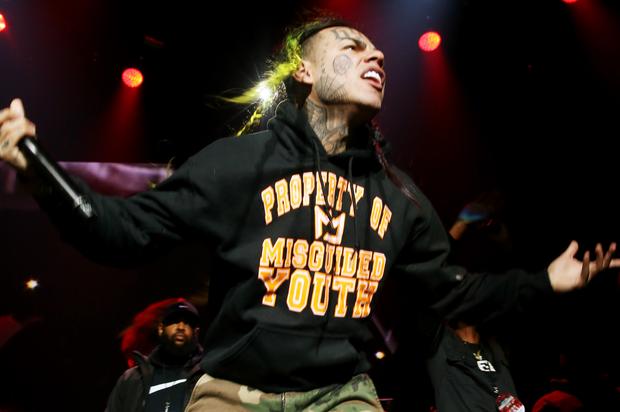 You’ll remember (and most haven’t noticed the subtle switch-up) that controversial rapper, 6ix9ine – currently in federal prison awaiting sentencing in a racketeering case – started his career under the name “Takashi 6ix9ine.” Both he and the media sites that report on him have used the names “6ix9ine” and “Tekashi 6ix9ine” nearly interchangeably over the years when referring to him. Despite that, until this past February, Complex reports what, 6ix9ine didn’t even own the rights to his name. The trademark of “Tekashi69” (along with “Scumgang69”) for entertainment-related usage was owned by Peter “Righteous P” Rodgers and “Scumbag Chad” Foster (who applied for the trademarks in late 2015), both of whom, are former 6ix9ine affiliates that are now associated with the group City Morgue. Rodgers, the older, half-brother of City Morgue member, Zillakami, managed 6ix9ine during his early career and Foster was, until they fell out in late 2016, a close friend of 6ix9ine’s. “Chad was Tekashi’s best friend back in the day, even before 6ix9ine was really a rapper,” producer Jordan Granados, who produced early 6ix9ine tracks like “ScumLife” and “Shinigami,” explained.

Back in October of 2018, 6ix9ine began legal proceedings to get Rodgers and Foster’s rights to use “Tekashi69” trademark revoked, with his attorney, William Samuels, arguing in a “Petition for Cancellation” that P and Chad had never used the mark. He also argued that 6ix9ine had right to it because it had: “Been continuously and extensively used, advertised and promoted nationwide and internationally for more than 4 years, in connection with various of Mr. Hernandez’s entertainment-related goods and services. […] Mr. Hernandez has sold more than 4 million records in the U.S. and worldwide under the 6ix9ine Marks. His collaboration with culturally significant artists and musical acts, including Nicky [sic] Minaj, Kanye West, and the recording artist known as 50 Cent, demonstrates and confirms Mr. Hernandez’s fame and success.”

As part of the proceedings, letters were sent to both  Rodgers and Foster to see if they wanted to dispute the claim, but the letters were returned undelivered, and as a result, on Feb. 20, 2019 their registration was officially canceled. If you’re wondering what this means for the “MAMA” rapper, in the paperwork, 6ix9ine claims to already have “exclusive right to commercialize his name(s), images, signature, likenesses, and other indicia, including specifically his names 6ix9ine and Tekashi69.” But what changes is that he now has the opportunity, if he would like, to attempt to file for the trademark.