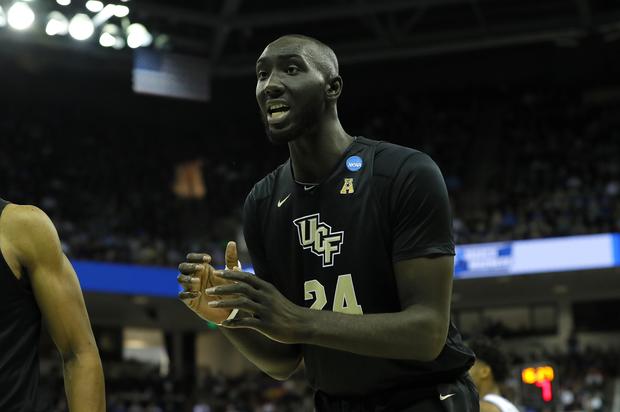 Tacko Fall dazzled basketball fans during the NCAA Basketball tournament this year thanks to his huge size and long reach. Fall is one of the tallest players in NCAA history and was a huge reason why the UCF Knights almost beat the Duke Blue Devils in the March Madness tournament. The UCF big man is a prospect for this year’s NBA Draft and yesterday, he was invited to the NBA Draft Combine where all of his measurements were taken.

ESPN NBA Draft Analyst Jonathan Givony was reporting from the combine and explained that Fall’s measurements actually broke league records as his size was something the league hadn’t seen since all the way back in the 1980s.

Fall’s height was listed at 7’5″ 1/4 without shoes and was 7’7″ with his sneakers on. What’s interesting about Fall is that when he reaches in the air, his standing height is higher than an NBA rim, at 10’2″ 1/2. As for his wingspan, Fall was listed at 8’2″ 1/4. Despite his height, Fall is only 289 pounds which could be seen as a disadvantage since he’s pretty skinny for his size.

During the NCAA tournament, Fall was criticized for being slow on the court when it came to transitions. Regardless, Fall will certainly be an effective player at the rim.