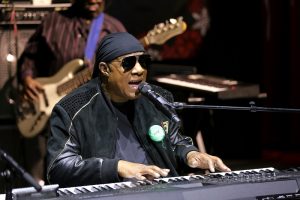 Stevie Wonder shared his future plans to move to Ghana with Oprah Winfrey in a recent interview.

The 70-year-old says he wants to protect his grandchildren from racist injustices in America. “I wanna see this nation smile again,” he told Oprah, 67. “And I want to see it before I leave to travel to move to Ghana, because I’m going to do that.”

The host asked him to clarify if he’s moving to Ghana permanently and Stevie Wonder responded, “I am, because I don’t want to see my children’s children’s children have to say, ‘Oh, please like me. Please respect me. Please know that I am important. Please value me.’ What kinda [life is that]?”

The singer has lived a long, illustrious life and his move can be motivated by a number of things. But it’s proven that Black people feel a sense of pride and security when surrounded by a majority of other Black people.

It’s said that Historically Black Colleges in the United States mirror this feeling.

This is the first time that Stevie Wonder talked about moving to Ghana. The “Superstition” singer said in a 1994 interview with the International Association of African American Music that he fell in love with the country and “there’s more of a sense of community there.”

In honor of Dr. Martin Luther King’s birthday last month, Stevie Wonder penned an emotional letter speaking out on the lack of racial advancement since his assassination.

“Dear Dr. King, I met you when I was 14 years of age,” he began. “You were a true hero and you became an inspiration.”

Wonder later said, “It is painful to know that needle has not moved one iota. For 36 years, we’ve had a national holiday honoring your birthday and principles, yet you would not believe the lack of progress. It makes me physically sick. I am sick of politicians trying to find an easy solution to a 400-year problem.”

What are your thoughts on the reason Stevie Wonder is moving to Ghana?

The post Stevie Wonder Announces That He’s Permanently Moving to Ghana appeared first on The Source.