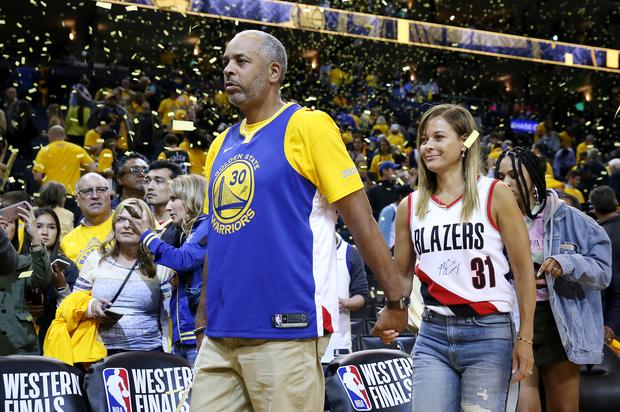 Lost in the NBA Draft Lottery hysteria was the fact that the Golden State Warriors and the Portland Trail Blazers played the first game of their Western Conference Finals series. In the end, the Warriors came out victorious by a score of 116-94. It was a huge game for Steph Curry who scored a game-high 36 points and was easily the best player on the court. On the other side of the floor was his brother Seth Curry who struggled as he only scored three points in 19 minutes of action.

It was an interesting night for their parents, Dell Curry and Sonya Curry who are conflicted when it comes to who they should root for. Dell was wearing a Warriors jersey while Sonya sported a Blazers jersey. Despite the Blazers attire, she was seen cheering on Steph whenever he hit a shot for the Warriors. After the game, Steph explained just how weird it was to see his parents in the stands.

“They can’t help themselves so anytime either one of us did something good they both were clapping, so they gotta fix themselves,” Steph said according to Complex. “I told my mom, ‘Who you with?’ When I made a shot I saw her stand up and cheer but I saw all Portland gear. It was just weird.”

With the Warriors up 1-0 in the series, the Blazers will be in for a tough match when they come back to Oracle for Game 2 on Thursday.

Paul Walker’s Personal Car Collection Auctioned Off For Over $2.3M