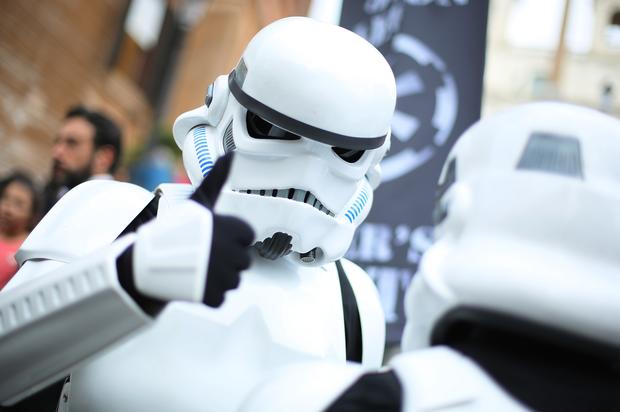 The third film of the sequel trilogy,Star Wars: The Rise of Skywalker is due to be released in cinemas this upcoming December, and details about Star Wars episode 9 have slowly been revealed over the past few months. And now, ahead of San Diego Comic-Con 2019 later this month, images have been released showing the most up-to-date version of the First Order Stormtroopers, with a pretty fiery makeover… Instead of their conventional black and white uniforms, they’re wearing red. The creators of Star Wars, Disney, are dubbing these new Stormtroopers “Sith troopers,” a detail that BBC believes could mean “they might work for a Sith Lord, a sort of evil Jedi – like Snoke or Darth Vader himself – who use the dark side of the Force.”

Starwars.com calls the eye-catching new look “a modern and more menacing look befitting its namesake.” “It has some really unique aesthetics to it,” Lucasfilm archivist Madlyn Burkert said. “And it has some subtle ties to previous stormtrooper designs, which I think fans will enjoy discovering.” The Sith Trooper’s red attire is reminiscent of the clothing worn by Emperor Palpatine’s Imperial Royal Guard in 1983’s Star Wars: Return of the Jedi. Those who watched The Last Jedi can recall just how prominent the color red was with everything to do with Supreme Leader Snoke.

The new troopers will be a part of a special exhibition displaying all the different Stormtrooper designs throughout the franchise’s history at this year’s Comic-Con.