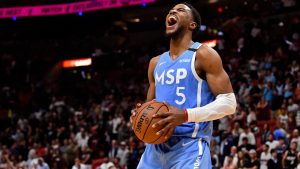 Malik Beasley won’t be suiting up for the Minnesota Timberwolves anytime soon as the swingman has been suspended for 12 games without pay after pleading guilty to felony counts of threats of violence in a case in September.

“As an organization, we fully support today’s decision by the NBA,” Timberwolves president of basketball operations Gersson Rosas said in a statement. “As we work together with Malik to advance his development as a player and a person, we look forward to seeing his growth.”

Beasley will begin missing time from the Washington Wizards game Saturday and can return on March 27. During the games missed, Beasley will forfeit $1.1 million in salary.